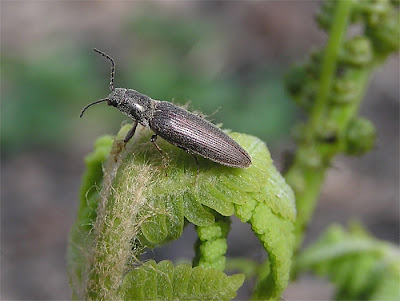 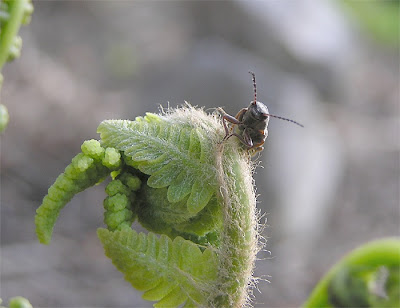 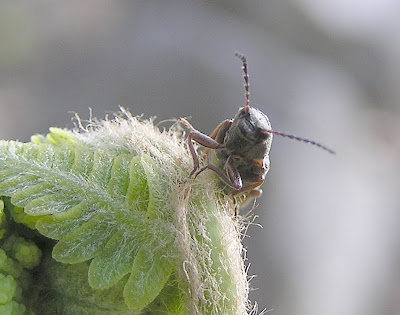 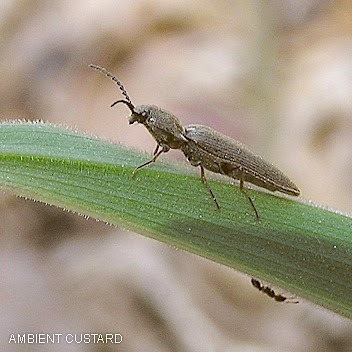 There is nothing more kooler in the world than Click Beetles. And now, in early spring, just as Jack in the Pulpits start to pop out, is when Click Beetles come out in the open and start clicking around. 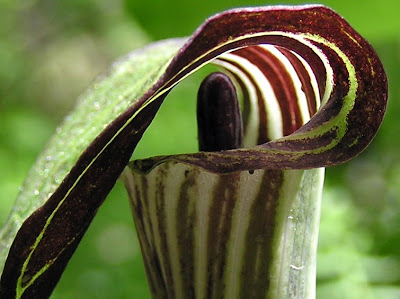 Click Beetles get their name because if you see them on the ground and flip them over on their backs, they pull their legs in close to their body, become perfectly motionless and look like a sunflower seed without the stripes: 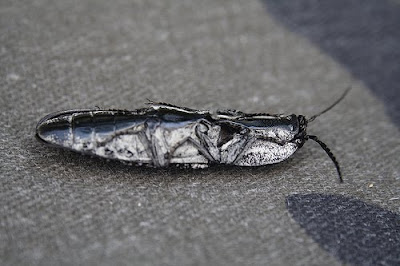 Photo by Jennifer Schlick at winterwoman.net.Then they arch their backs and violently spring upward off the ground, creating an audible "click" sound and pop several inches into the air, whereupon they land on their feet and run or fly away. It is a very unique anti-predator device because it combines hiding motionless (like a hognose snake or opossum does) followed by a sudden and very odd burst of movement that, to many predators, must appear to make the click beetle disappear.

The click beetle, like the hognose snake, adopts a two-phase predator avoidance approach, but in reverse. The hognose snake, also called the "puff adder," first adopts a menacing aggressive stance and puffs up its body to make it look much bigger. Then, if that fails, it rolls on its back, goes limp and plays dead. Click beetles first play dead, then aggressively "click" up in the air and pop out of sight. 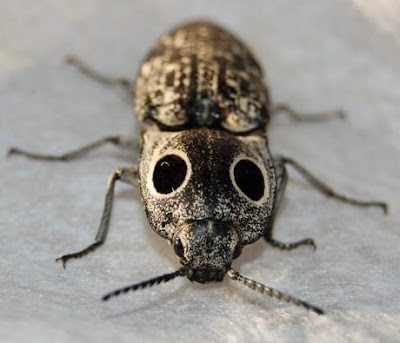 Discussing the big fake eyespots of some click beetles the other night, my wife Lori noted that it's hard to believe a predator, say a sparrow, would be "scared" by the fake eyespots on a click beetle, since despite its fake eyespots, the beetle is still less than an inch long. To even a small bird, it's still just a little bug. As Lori says, "It's not like the bird suddenly thinks it's an owl." But maybe? [1]

So perhaps the false eyespots are not meant to scare away predators but evolved to act as reverse camouflage in concert with the click. The false eyespots are so loud and bold and easy to see that once the click beetle senses a predator it flips on its back, pulls its legs tight alongside its body and stays perfectly motionless, like a tiny oval stone. If the predator (a sparrow) is tracking the click beetle based on the bright and big eyespots on top of its head, when the click beetle suddenly flips on its back, concealing its eyespots, it might from the bird's perspective look like the click beetle has disappeared. And if that still doesn't work, the click beetle can still use its clicking power to pop up in the air and confuse the bird further. It would sort of be like a tiger swallowtail butterfly having an underside which is completely drab and muted and gray and the swallowtail being able to "switch sides" in a split second and blend in with the gray, muted tones of a tree trunk when a predator approaches. 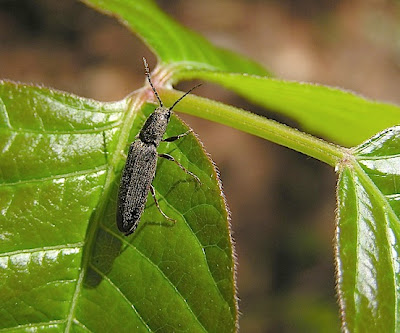 Here's a click beetle on poison ivy near the Presumpscot River, Westbrook, Maine.
While I'm no expert on Click Beetles, I do know that they are only commonly observed in Maine in the spring, just as the leaves are coming out on the trees, ie. early May. At this time, the click beetles perch themselves in very visible locations, like the tips of leaves, or as below, on the cap of a glue bottle in our side yard. Soon after, they disappear. When they do this "perching" behavior, they are very non-skittish and stationary and you can get quite close to them, which is how I got these photos. I am wondering if this is a mating behavior since it occurs in the spring and only lasts for a week or so. 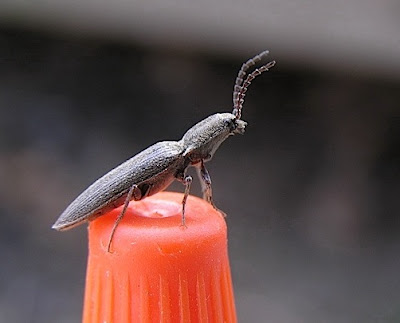 Our tiny in-town yard (1/8th acre) in Augusta, Maine has an abundance of click beetles every spring. This is probably in part because we don't spray or use any chemical herbicides or pesticides. If you spray stuff that kills insects in the air or in the ground, you can't expect to see many of any species, especially beetles, which live in the ground as larvae for several years or more. I like beetles and insects of all types. They are endlessly fascinating. Click Beetles helped create this song.

UPDATE: I needlessly confused GrrrlScientist by the last sentence, for which I apologize. There are no recordings of click beetle clicks in the above song, which is named "John Kpiaye" in honor of the guitarist in Linton Kwesi Johnson's Dub Band, whom I always try to copy. What I meant was that I used the click beetle photo above labelled "Ambient Custard" as one of several CD covers for the instrumental CD which includes that song. I can attest that my little buddies the click beetles were certainly an inspirational component when that song and CD were written and recorded.
[1] Of course, this explanation does not explain why click beetles did not just stay drab and inconspicuous and not develop big fake eye spots in the first place. Perhaps big fake eyespots take advantage of a neurological trigger in predators that fools them into thinking the beetle looks "BIG" even though ocular evidence shows it is not. This is not unprecedented. It is well documented that small mother wrens will continue feeding baby cowbirds or cuckoos in their nests even though the babies are twice or three times the size as their foster mothers, and the foster mothers do not notice the obvious and bizarre discrepancy in size.
Posted by Douglas Watts at 12:19 PM

Hello. I found a beetle on my driveway the other day and was curious. Laying on its back with its legs folded up and in, I thought it was dead. I turned it over to look at the other side and it clicked but didn't move. Sort of startled me thinking it was dead. It still had its legs folded and still looked dead so I thought I may had been losing my mind. I turned it over and looked at the big fake eyes and they look like where it should have eyeballs in the fake sockets, have rotted away leaving a dead beetle which some birds may not like old dead beetles and leave it alone. I don't know. Just a thought. At least I now know that it is a click beetle. You said yours was an inch long where as the one I have is almost three inchs long. Thanks for the info.

My 10-year old son just found, video-taped, and played with a two and half inch long click beetle with the huge fake eye spots. Not such a small bug! We were totally fascinated and wanted to look him up on the computer. Thanks in North Carolina!

I live in Portage Indiana and found a click beetle , he landed in my petunias, he's close to 2 inches long and what appears to be huge eyes , neat but scary too. never seen one of those before.

today is july 21st, 2014 and my husband called me to look at 'this bug' on our woodshed. i don't believe i've seen one before. took some photos and just found your site. thanks for answering my questions. i live in upstate ny….

Actually found several of these in my house in upstate New York. I read your page to find out what kind of bug this might be. The clicking noise startled me during the middle of the night and it turns out that it was these little creatures.

Just lying in bed in upstate ny
and hearing this constant click,googled it ,wonder if it is a click beetle