Sorry your country got blown to shit, but standing up to Bush might have cost me politically.

Four Legs
Posted by Douglas Watts at 9:18 PM No comments:

"America: you reap what you sow. Wake the f*ck up. The financial economy produces nothing and is generally a wealth transfer mechanism from lower wealth individuals to higher wealth individuals. Yes, we all want to get rich and not have to work at our sh*tty jobs everyday, and that is why most of us are here reading this. But really, society should be applying itself to something more useful than propping up the goddamn stock market."

Commenter Chris at the Big Picture.
Posted by Douglas Watts at 3:11 AM 1 comment: 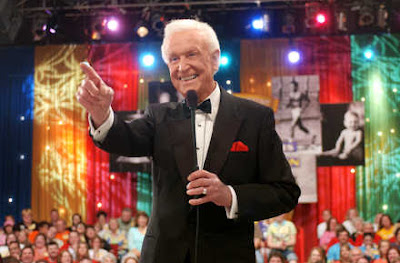 You're the next RedState contestant on You Are Insane !!!
--

Respectfully, it's not racist for me to conclude this. Considering the Democratic party is the party of institutionalized racism through affirmative action, set asides, quotas, Voting Rights Act gerrymandering, and what have you, and these people are themselves constantly saying that "race is always an issue in America," I'm just taking them at their word.


You have to love that opening clause. It sets up the whole volley. Advantage Neil !!!
Posted by Douglas Watts at 10:10 PM No comments: 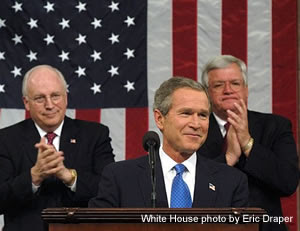 "The British Government has learned that Saddam Hussein recently sought significant quantities of uranium from Africa."

Posted by Douglas Watts at 8:56 PM No comments:

The guy's diction sounds like he's trying to talk while he's chewing on a mouthful of shit. Is he saying "terrorists" or "tariffs"?
Posted by Douglas Watts at 6:53 PM No comments:

It would be inappropriate not to consider that ...

Barack Obama has only held national elected office for a short time prior to his bid for the presidency. One must ask if this makes him unqualified for the nation's highest office.

Posted by Douglas Watts at 2:56 PM No comments:

Jack Shafer is an idiot 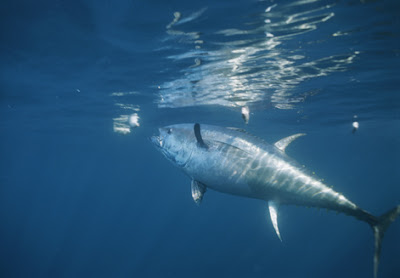 Jack Shafer tries to play cutesy contrarian regarding an NYTimes story which found, to nobody's surprise, that eating Atlantic bluefin tuna sushi is like eating a mercury thermometer bulb. Shafer is one those "journalists" who think that well ... a fish is a fish. Like, dood, they're all fish.

Err ... wrong. Any idiot remotely familiar with the subject of fish, fishing, commercial fishing and giant bluefin tuna knows that the giant Atlantic bluefin tuna favored by high-end sushi bars are mercury magnets. This, of course, IS THE WHOLE FUCKING POINT of the NYTimes story .. in which the newspaper actually had Atlantic bluefin tuna sushi tested for mercury and found many samples for sale in restaurants exceeded EPA safety standards for mercury.

What a shit head.

But more important -- Atlantic bluefin tuna are now being fished to extinction for sushi.

Posted by Douglas Watts at 7:15 AM No comments: 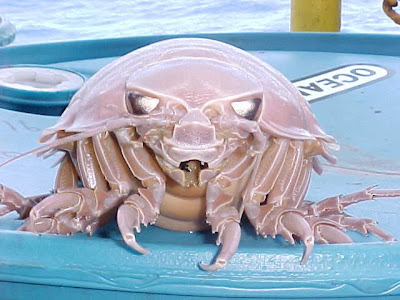 --
In Massachusetts we always called the little gray isopods you'd find under rotting wood, "potato bugs." Meet Bathynomous giganteus -- a deep sea potato bug that reaches up to 24 inches in length. Bugs the size of dogs are kool.
Posted by Douglas Watts at 7:07 AM 2 comments: 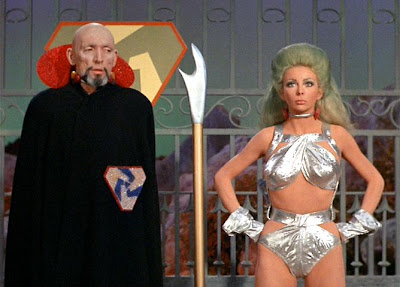 This is the episode with the giant can opener duel. Excellent.

Richard Brucher says So What ??? 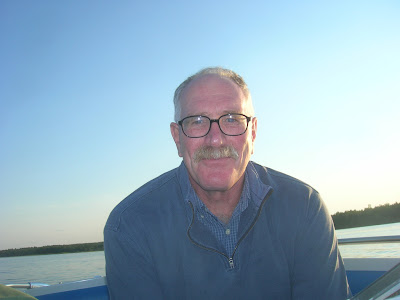 You don't want Dick Brucher asking you, "So What???"

Today's Republicans are basically a Funhouse mirror of projection at the Skowhegan Fair. Guys hating gays for being gay being just one example. White guys hating black guys for being 'sexually adept and ready' ... etc. The list goes on. In the case of global warming and pollution in general, the projection is they secretly want a free lunch -- the right to spend and waste without consequence or backlash. Basically they are a mix of Calvinist and Cavalier that cannot make it to the bathroom and doesn't know if they need to shit or puke when they get there.
Posted by Douglas Watts at 10:14 PM No comments: 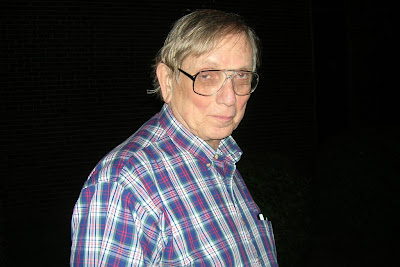 Burton Hatlen died at the age of 71 this weekend in Bangor. Burt was the head of the UMaine Orono English Department for many years, including when I attended. Burt Hatlen brought a spunk, gravitas and monumentousness to UMaine that told even dumbass undergrads like me that I was going to school in a special place where lots of big stuff was happening and I was not just breaking rock at a loser place. But at the same time, Burt was completely approachable and the antonym of pompous and aloof. I miss him.
Posted by Douglas Watts at 2:35 AM No comments:

Nobody keeps track of the wars that were prevented and never happened and cost no lives, and therefore, are not counted in the books as “wars.”

Sort of like all the people walking down the street who don’t suddenly randomly murder the person walking by them.

It is not coincidental that only wingnuts keep track of the death counts in various wars as if it was fantasy football.

And say "this war" has just a tiny fraction of the deaths in "this war."

As if that's a selling point.

Is second prize a set of steak knives?
Posted by Douglas Watts at 1:29 AM No comments:

With insufferable inanity and a very kool POLL !!!
Posted by Douglas Watts at 12:40 AM No comments:

I Am Open to All-Out War

But I need better pro-war arguments. Specifically, I need pro-war arguments that do not involve the invocation of a skin color or religious persuasion. If I can get those, I am very eager to listen and consider.

It is my New Years’ Resolution to be reasonable and open to dialogue.

The dynamic on domestic spying is simple. You're not being spied on. And even if you are, it's only to protect your children from being killed. And we know you are not doing anything wrong, so you have nothing to worry about.

I've actually tried to stay on top of the tootsie roll patrol this winter. -- noblejoanie
--

You need to be a Calvinist when it comes to poop.

Tispaquin
Posted by Douglas Watts at 6:29 PM No comments:

If my favorite Democratic candidate who is not Hillary does not win, I will stay home and cry and blame it all on her ... waa waa waa ...

I think Martin Luther King, Jr. expressed it best when he said, "If Bobby Kennedy does not get the Democratic nomination, I will not vote and instead I will stay home and cry like the wussy I am."
Posted by Douglas Watts at 1:59 AM No comments:

Most Democratic voters don’t care if they are being spied on by the U.S. government. Most assume they are, and most do not care either way. Being spied upon by the government does not register high on the scale of stuff. Nor does letting off scot-free the corporations that have done it. Most Democrats don’t really give a crap because, like torture, they know it will never actually affect them personally. The Constitution was written by people obsessed with philosophy, about the “concept” of stuff. Americans and most Democrats have not been raised or educated in the philosophic tradition, nor do they travel in places where this is paramount. Superficial is as superficial does. Pass me the HD remote.

I will say that if you visit any rod and gun club in southeastern Massachusetts (oh … say the Easton Rod & Gun Club) you will meet people who deeply understand the “concept” of gun ownership and the “concept” of the 2nd amendment at about one googol levels. Why this conceptual depth does not translate to other parts of the Constitution has always perplexed me. But then again, rod & gun clubs have forever excluded women from being members (and … ahem … deeply tanned males) so I think I answered my own question.

The legal right of gun ownership is palpable. It can be weighed. You can either legally possess the heavy steel thing or you can’t. Spying by the U.S. government only takes away your privacy — your lack of being spied on. Nobody comes and arrests you. Nobody comes and takes away a big block of expensive metal that you bought. Nobody at a store tells you they can’t sell you something. Same with torture. Your Constitutional protection from being tortured only becomes palpable when you are being tortured.

Unlike the right to buy and own a gun, when your right to not being spied on and not being tortured is taken away by a Legislature, you don’t feel anything or seem to lose anything because these are negative rights. They are the sacred rights to be left alone in your own body and to have your body left untouched. Unlike buying a gun, you are not acquiring or adding something to your body when not being spied on and not being tortured. You are just asking your naked body to be left alone in the condition that it was created when you left your mother's womb.

It's not like you have to go to K-Mart every year and buy a license to not be spied on and not be tortured and all of a sudden, they refuse to sell you one.
Posted by Douglas Watts at 11:11 PM No comments:

And look what all that Nader love got ya ...

Go hold a Green Party caucus in a broom closet.

"My wife loves it. Nothing warms her up on a cold day like a nice hot Dickens Cider."
Posted by Douglas Watts at 9:35 PM No comments:

I hate George Bush. He deliberately plays the role of the moronic yes-man who blindly fake-laughs at whatever his boss, Dick Cheney, says.

effin' h/t to Sinfonian.
Posted by Douglas Watts at 8:59 PM No comments:

Jimmy Carter, as a degreed scientist and engineer, understood correctly our relation with the elemental nitrogen, carbon and oxygen and silicon that we require to even have the barest foothold on this weird planet amongst a universe of barren ones. Every President since Jimmy Carter has been completely ignorant of basic chemistry. If the atmosphere and climate becomes toxic due to our inputs, then we all fucking die.
Posted by Douglas Watts at 9:28 PM No comments:

The only class I had trouble with in grad school was in American Lit, and that's because of the prejudice against my thesis titled: "Nine Times Out of Ten, They Shouldn't Have Bothered."
Posted by Douglas Watts at 12:16 AM No comments:

So much depends on
a red wheel barrow
you fascist fucks
die bitch die.
Posted by Douglas Watts at 12:03 AM No comments:

Yeats was Irish and Fascism proper never had much of a hold there. - Thers

"Me and FDR were trying to defeat Hitler and we .. excuse me .. forgot to tell our wives how important they were ... so we chose to save the world instead of buying them flowers. I guess we're big jerks !!!!"
Posted by Douglas Watts at 9:37 PM No comments: