Last night I dreamed that I was watching a black and white documentary in which Bob Dylan performed an original song for archival recordist John Lomax called, "Following Mr. Johnson into Space." It went like this:

We all gathered around our TV sets
Most of them were black and white
We saw Mr. Armstrong put his foot down
And he did not sink out of sight.

They found a brand new lead mine up in Solon.
People are sanding rocks into shapes.
I was at my girlfriend's house near the college
When we followed Mr. Johnson into space.

They drew all the lines for their theories.
They filled all the spaces in their charts.
They kept it up 'til they were weary.
They were just doing their part.

We were so poor that we couldn't afford darkness. Mum had to make quilts from black cloth and hold them over the street lights until they turned off in the morning.
Posted by Douglas Watts at 12:58 AM 1 comment:

We were so poor that we couldn't afford stars. Dad had to climb up the maple tree with a little flashlight and make "star" sounds.
Posted by Douglas Watts at 12:42 AM No comments:

In 1999, the University of Maine collected all of its scientific "forces" to declare that Atlantic salmon no longer exist in Maine.

In 2002 and 2004, the National Academy of Sciences told the University of Maine it was completely wrong.

Since then, the University of Maine has had nothing to say about Atlantic salmon.
Posted by Douglas Watts at 11:10 PM No comments:

This is NC-17. You have been warned.
Posted by Douglas Watts at 8:21 AM No comments:

My Rant for Liberal Arts Education

A fairly good editorial in the Bangor Daily News elicited these thoughts:

This editorial, while it tries to do the right thing, says exactly all the wrong things. The reason Maine has no jobs left is because UMaine has focussed on trying to "educate to the job" for the last 25 years. And what has that gotten us? Fewer and fewer jobs requiring less and less skills and knowledge. Dumbing down college has not made Maine students any more employable. It has only made Maine students more expendable.

The BDN makes the same mistake as those trying to defend not bulldozing the Amazon because a plant in there might lead to a cure for cancer. While possible, it is the worst way to defend a good cause. It is like saying that the best reason to help your mother is because someday she might help you. Starting a negotiation at the lowest common denominator rarely compels the parties to aim higher.

When I went to UMaine Orono, a large portion of the curriculum for mechanical and chemical engineering (and college in general) was directed at Jenness Hall and pulp and paper science. Basically, UMaine was a vocational school for the paper mills. It taught exactly what the paper mills wanted students to be taught. Now there are a tiny fraction of paper mills and paper mill jobs left in Maine, as compared to 1982.

Universities should be leading, not following. They should be creating new industries, not simply stamping out employees for old and dying ones. To do that means taking risks and letting the chips fall. Many of our nation's most smartest minds had no idea what they wanted to do when they grew up, let alone when they finished college. 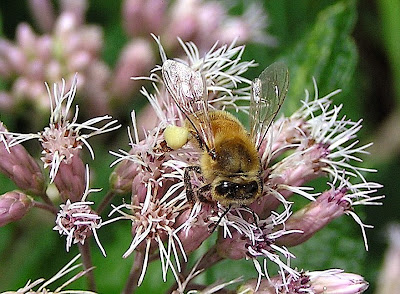 Last night I dreamed the Kennebec River in Augusta was 2,000 feet across separated by a comma shaped island and we were all climbing along the crumbling Edward Dam abutments in the thin, wet, trickling gravelly path between silver maples where the river runs soft and cool and shaded and shallow. The full brunt and width of the river was way off in the bright sun to our right, rippling against the railroad and the tall brick walls of the factories, moving and swinging so hard and rough that no one in a boat would try to go up or down it.

It was the July anniversary of the Edwards Dam's removal in 1999 and the Kennebec Journal that morning had published a story by Jon Lund of Hallowell which showed a photo of my hand holding a fly rod just above the algae covered rocks. In a side bar to the story, the KJ noted that the City of Augusta had held a "Miss Edwards Dam Contest." Steve Brooke and I watched brown trout, about 18 inches, and then Atlantic salmon, 4 feet long move through the sandy gravel and half-buried timbers and scoot upstream past the site of the dam. I shouted to Steve, "Get out of the @#$% water, Steve, they're coming upstream !!!" They were the biggest salmon I had ever seen.

I have had these persistent dreams about the Edwards Dam for almost 20 years. In each, the dam is in a different position and configuration. Often there are three Edwards Dams all in a row !!! Often the Kennebec oddly branches above Augusta into tributaries with weird names like the Skowhegan River or West Branch Jackman Stream. I have spent many tossing and turning nights walking under railroad bridges and stumbling over metal pipes in these streams following fish and crayfish through their moss braided and beer can studded rocks.

Last night was different because, for the first time in history, a newspaper covered my dream of the Kennebec, including parts even I did not know about until I read them in the newspaper in my dream. Last night, the Kennebec Journal did a photo feature on a beautiful road stop and turn-off a ways downriver from Augusta called the "Lisbon Slough" which the KJ said is the traditional place where people from Augusta have gone to camp and picnic and swim in the Kennebec after it was dammed at Augusta by the Edwards Dam in 1837. The newspaper pondered if people from Augusta would begin to move upriver to the former dam site from their traditional recreating place downriver at the Lisbon Slough now that the Edwards dam has been removed and the river has been restored.

This is a good question.

Posted by Douglas Watts at 11:15 PM No comments:

US EPA does not love and cherish Maine's plan to destroy Sears Island ... 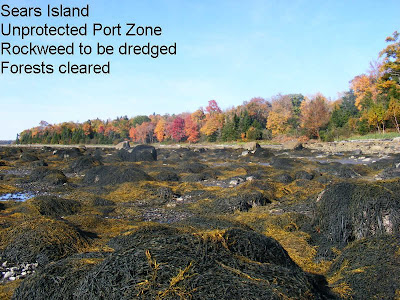 Ronald Calvin Huber of Rockland, Maine informs me of the following news, courtesy of the very nice folks at Public Employees for Environmental Responsibility (PEER).

The folks at PEER also heart my own Hockomock Swamp, which my brother Tim writes about here. I grew up in Easton, Massachusetts, the home of the Hockomock, and its presence is imprinted into my DNA. But at age 18, I left home and moved to Orono, Maine and confronted the massive and mighty Penobscot River, whose tributaries of tributaries of tributaries are bigger than the biggest brook in my home town.

During the past 27 years, the Penobscot has become my "second" home and I have drunk deeply from its waters and explored its fascinating and frequently disturbing history. The 1,000 acre Penobscot River island now called "Sears Island," a ways off the shore in Searsport, is the largest undeveloped island left in Maine.

For the last 40 years, the State of Maine has done everything in its power, including breaking federal and state laws, to develop Sears Island, and as they say, "make it pay its way," as if a spring peeper must do useful work besides peep (run on a treadmill?) to justify its creation to God.

The Penobscot's Sears Island and the Hockomock Swamp of southeastern Massachusetts are two peas in a pod in the sense that writer Henry Moore described more than 40 years ago. They are an "oasis of peace and quiet in a world gone mad with speed, noise and strife." The human soul desperately needs such places, just as we need a clear and dark sky to show our kids the Pleiades.

Without places like Sears Island and the Hockomock, life is like climbing into a wet sleeping bag.

When I was just a baby, the now-famous investigative journalist Ted Williams was a lowly "staff writer" at the Massachusetts Dept. of Fish and Game. Around 1967, Ted Williams organized and wrote much of a small book called, "Hockomock -- A Wonder Wetland." This small book helped stop the ten square mile Hockomock from being destroyed. In this booklet, which I read thousands of times as a boy, a young Ted Williams wrote:

In our 322 years of tenure, the Hock has withstood efforts to destroy it. Corners have been nibbled away and its face has been scarred with roads and power lines, but miraculously most of the swamp still exists in its natural state, resisting mindless "progress" by its inaccessibility.

However, draining and filling techniques are constantly being perfected and with the pressure on the land mounting to the danger mark, the Hock's days are numbered unless Massachusetts citizens decide to preserve it.

Existing wetland legislation lacks the muscle needed for a quick and solid stance against environmental exploitation. If we rely on present regulations it will take years to place even a fraction of the Hockomock under the umbrella of the law. During that time the remainder of the swamp will have been drained and filled and Massachusetts will be a poorer place.

The future of the Hockomock depends upon YOU. A favorable public attitude is the only effective defense of any wetland or open space. If those who really care about the Hockomock convince others of its value the first step toward its safety in the future has been accomplished."

All of what Ted Williams wrote 45 years ago is true today for Sears Island. And the Hockomock.

So if you ever consider donating some money to a conservation group that does really important, hard-hitting stuff to actually protect places like the Hockomock and Sears Island from being destroyed by your own public officials, consider giving a few bucks to PEER. They do good work. Tell them Tispaquin sent you.

Thanks.
Posted by Douglas Watts at 9:50 PM 5 comments: