Here's a radically traditional 1926 version of a song by Frank Zappa that he and his band played quite a bit in their early 1980s tours. At the time, he allegedly described it as "a country song on PCP" that would cause the "death of country music." It did not surface in a recorded version until the 1984 double album, Them or Us. 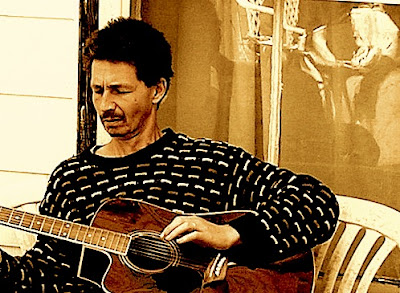 In the late 1970s Zappa couldn't resist poking fun at country music, probably due to the ascendance of televangelists like Jerry Falwell and his waterboy, Ronald Reagan, who piously extolled the genre's celebration of enduring family values ... like ... umm ... cheating on your wife and being a useless drunk.

But Truck Driver Divorce is not a country song. It's really a mid 1920s Al Jolson kind of song ... on PCP. But then again, Al Jolson is like Al Jolson on PCP, so go figure.

And despite some enthusiasts' claims that this song is just Zappa's live band doing a loose, free improvisation behind a similarly free vocal improv, it is built on a standard 1920s-type descending I-IV blues progression using two major chords and their dominant seventh and minor, ie. I-I7-IV-IVm. In each second section, the I-IV resolves to the V. This is a scheme heard in countless ragtime and blues songs of the pre-1930s era and practically begs the singer to do the melody like Al Jolson, which is what Frank does, creating the appropriate level of cloying, obviously fake sentimentality the lyrical subject requires.

In the key of G, the basic chords are:

While the vocal melody starts on the G, you need the D flatted seventh to set up the flavor of the song's tonality. This type of intro is a standard ragtime device, probably to get people in the room to notice the band is going to start playing a song. Blind Lemon Jefferson uses this kind of an intro in his 1926 song "Beggin' Back."

Note that all the seventh chords are not the major seventh but the dominant, ie. flatted seventh. So in G7, the seventh note is F natural, not F sharp, ie. G-B-D-F, which is what gives the progression a ragtimey feel.

Because this is supposed to be a country song, the G position on bass does not let you alternate down to a low D as the fifth which you really need to get that honky-tonk feel. Instead of detuning the low E bass string to D, I alternated the low G with the open D string. In the back end (4 bars) of each second section the bass really needs to walk through the chords on straight eighth notes instead of the rocking chair squeak kind of quarter notes at the front.

The final verse is different:

A7
Bust Your Ass

Cm
To deliver some string beans

A7
To deliver some string beans

Despite that Zappa's original live recording sort of sounds like a free improv, the composition is tightly structured and Zappa's vocal melody follows the I-IV progression closely, even though he and the bass player perversely flatten or double flatten a bunch of the notes. According to those who zealously research this arcane stuff, the instrumental back end of the recorded version is a spliced-in live performance of the song Zoot Allures from 1981 in New York City.

So anyways, if you have an acoustic guitar and can play open first position chords, you can play the 'real' arrangement of Truck Driver Divorce and exorcise your secret desire to be Al Jolson or Bessie Smith doing a really stupid country song about driving a truckload of string beans to Utah.

About the string beans. Zappa must have written these lyrics at the same time he wrote "No Not Now" from Ship Arriving Too Late To Save A Drowning Witch, since both songs contain a lot of the same phrases, like "transcontinental hobby horse" and "oh the wife ... oh the waitress ... oh the drive all night long," etc. And, of course, string beans to Utah, which apparently has some weird connection to Donny and Marie Osmond.

What I like about Truck Driver Divorce, aside from its sheer and unrelenting idiocy, is that the melody and chord progression are rooted in the 1900-1910s ragtime changes which by the 1920s became 'citified' by singers like Al Jolson, to the point where it's almost impossible to sing this song without subconsciously wanting to say, "Oh Mammy .... all the way home from Alabammie .... she used to cook me eggs and hammy ... Oh Mammy."

But the biggest challenge in recording the 1926 version of Truck Driver Divorce is that you can't sing the song straight because it's too flat-out stupid and songs in 1926 were never sung 'straight.' This is pre-method acting time. And I also didn't want to imitate Zappa's arrangement, since then what's the effing point?

After a lot of trial and error and messing around at 4 a.m. I started adding in all of the background noises, which consist of me pouring dirty bath water back and forth from a couple of plastic cat litter buckets and then kicking them over on the floor, shaking a bag of styrofoam packing peanuts, mumbling incoherently and imitating the voices of some weird people I know who talk like they have marbles in their mouth about shaving Brenda's crotch.

This fake audio verite approach is itself a direct rip-off of the Mothers' song "America Drinks and Goes Home" from Absolutely Free where Zappa creates a sound collage of a dive cocktail bar at closing time with Ray Collins saying 'last call for alcohol, drink it up folks' and offering them peanut butter and jelly and baloney sandwiches at their next gig while the patrons start throwing chairs and bottles at each other.

One problem with this recording approach is that it requires just the right mix of mayhem vs. music, which has a lot to do with mic placement and panning to enlarge the stereo spectrum so that you can still hear the song but the mayhem is right in your face. The production challenge is to take a completely studio recorded piece but make it sound like a single condenser mic at some weird PCP-laden hillbilly cabin in the woods.

The tail-out is me, Mark Kemezys, Jerry Trevino and Jeff Hursch doing some weird improv at 38-C Northern Ave with those 99 cent plastic slidey whistles.

You can also do the song in C, which falls well on an open, first position guitar, and nicely on the bass, since you get to hit the C root on the 3rd fret, 2nd string and drop right to the G on the low E string. That progression is C-C7-F-Fm with D7 and G7 replacing A7 and D7 as the adds.

Actually, Lemon Jefferson was one of the only 1920s singers to 'drop' the theatrical pose and do a song straight, meaning sarcastically, in "Beggin' Back," where in the improvised verses he's goofing on the chorus of the song.
Posted by Douglas Watts at 12:54 PM 15 comments: